Hey there. I’ve never done one of these “year in review” posts before, so bear with me here.

Back in February 2014 I had set some basic, certainly obtainable, goals for SIX15. They were to increase revenue by 50% over last year, formalize all my business documentation and processes, get off my ass and finish this website, volunteer to speak at local business or tech events, and blog at least once a week.

Let’s address these in the order I actually tackled them.

Formalize all business processes and documentation, vetting all necessary documents via an attorney.

I’ve operated SIX15 as a real business since 2003. When new projects come up, I use a slapped-together-collection of proposal, estimate, and contract documents that I copied from other agencies. They worked, no one complained, and the ones I copied were open sourced so I wasn’t violating anyone’s copyright. Luckily I didn’t run into any problems with clients, anyone questioning my business, processes, etc. But that’s certainly no professional way to run a business.

So I went through all my previous client documentation (proposals I’d written, contracts, estimates), as well as every example I’ve downloaded or purchased over the years (yes, I saved them all — my “research and reference” folder was often flagged by CleanMyMac as one of the largest folders on my computer’s hard drive.) I created standardized Proposal, Contract, Statement of Work, Retainer, and NDA documents. I got advice from my attorney on business insurance and had him review my newly created official documents. So that was a win. It felt great actually. I mean, sure, by business was running along great with each new client. But I just knew that I was on borrowed time–something bad would happen and I wouldn’t have the proper documentation to protect my or my client.

Finally — FINALLY — decide upon and launch a redesigned SIX15.com. 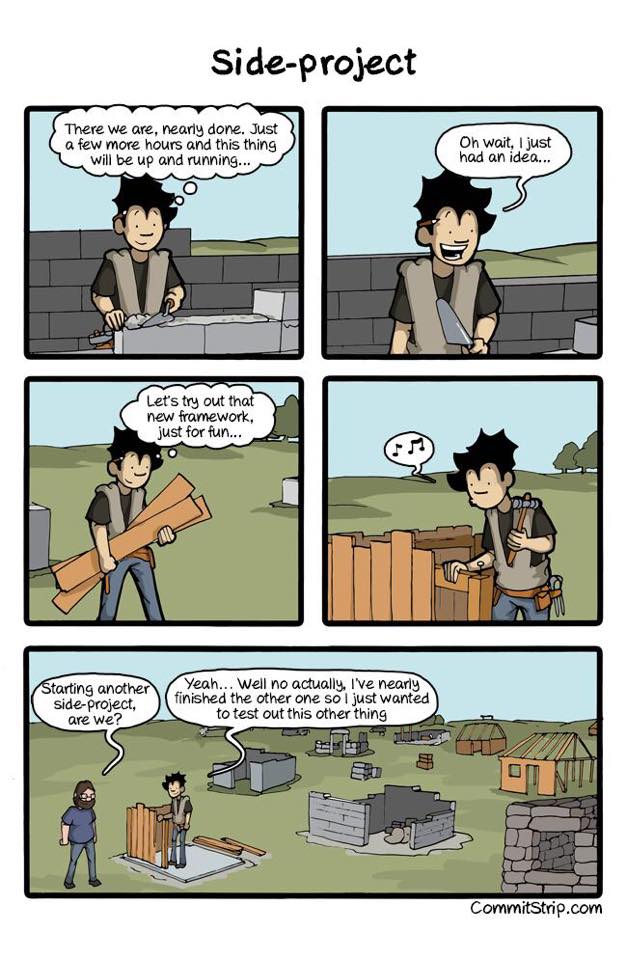 This website has always been a piece of work (both good and bad). I’ve owned the domain (and it’s variations) since 1999. I am SIX15, despite other companies or individuals using the same “SIX15” mark. I had my attorney file a DBA in the State of Michigan this year protecting my brand. But the website itself was always in a state of “almost finished”. I’ve always suffered from the analysis paralysis. Can’t be done until it’s perfect! Ugh. Just ship it already. The image here sums up my effort on the website–hey look, a new framework! Let’s scrap what I have so far and start over.

Well, the current design is what I’m sticking with for the time being. It’s been up since mid year. Yes, I realize that there are certain pages still not live yet. But hey, just ship it, right? It’s better than having a coming soon page up for several years. I’d say this goal was met halfway.

Blog at least once a week.

As for writing or posting a new blog post at least once a week, that is tough for me. I’m jokingly referred to as The Voice of Reason, but ironically have very few words to say when it comes to blogs. I’m a writer, but it’s been hard for me to find purpose for what I’d write about, especially for this blog. I’ve thought about this a lot. And while I did some minor “link” posts, there was no real original content added to the blog this past year. Everything I’ve read says that has to change if I’m to increase exposure, add people to my email list, etc. So I’d say I started on this goal but didn’t achieve it.

I did not speak at any business or tech conferences this year, unfortunately. I did however get more involved with volunteering effort and time with both the Oxford IT Schools advisory group and Oxford Business Chamber. They’ve both asked me to give talks starting in February 2015. So I’d say not much progress on the goal in 2014 but 2015 seems to be the year where this will definitely kick off good.

As you can see from the chart above, my month-to-month revenue was all over the map. And almost as sporadic as the month-to-month for 2013. That said, I did increase my revenue by 17% over 2013. While not quite 50%, it’s certainly better than 2103 being a down year compared to 2012. I continued to provide retainer maintenance support for a few good clients, as well as land several new clients from referrals. I bid on several smaller projects and two rather large ones (biggest I’ve bid on yet). Each month I gained more confidence in selling myself on value provided, rather than being a commodity provider. I bought and read Brennan Dunn’s Double Your Freelancing Rate book and that has helped me focus and gain even more confidence in submitting proposals.

I can’t honestly say I hit all of my goals I set for SIX15 in 2014. But I did learn an important lesson. It helped me focus. If I’m to make this business into something that I’ve always dreamed it could be, that’s an important fist step. At least I think so. Anyway, thanks for reading this far. I hope you and your family have a safe and Happy New Year!